The magic of green-screen – understanding it, and when to use it

For months I’ve been pestering my wife to watch some classic films with me. I had great plans of introducing her to Back to the Future, but somehow, we accidentally found ourselves watching the original Mary Poppins – don’t ask me how.

The last time I watched this I was probably about 8 years old. Back then, I was amazed and stunned at the cutting edge special effects that transported me into the singing and dancing cartoon world that Dick Van Dyke had painted on the pavements of London. When we got to the same point in the film a few weeks ago we were shocked by the ‘terrible green-screening’, which my wife very quickly pointed out – and does in many films and programmes we watch together. I feel partly responsible for this behaviour.

What struck me at this point was how far we have come with chroma-key technology… I wonder what our kids will think of Avengers End Game in years to come?

How does a green screen work?

Green-screens are used in a process called chroma-keying, which is a simple visual technique performed in post-production. Essentially, the chroma-key colour is identified and removed by the editing or visual effects tool, leaving the subject without a background. The subject can then be placed into a completely new visual environment.

This sounds very simple, but the skill lies with the production company to ensure that the camera height, lens distance and focal length, and lighting of both the foreground and background match. We often use this process for placing subjects into virtual presentations and for placing actors into 3D environments in commercials.

For an example of how this can be used, see the video we made for Acer earlier this year where we made a tiny genie appear and interact with a full-size actor.

Chroma-keying was first used in film in the 1940’s for a movie called ‘The Thief of Bagdad’, where a blue backdrop was used to isolate the actors from the background to help create the special effects required to tell the story. Blue was used as it is a colour that is far enough away from the actor’s skin tone and clothing. As years have passed, the colour blue became more common in clothing, and with the introduction of high-resolution digital cameras, green is now used more frequently in chroma-keying – hence the term ‘green-screen’.

With the development of video camera technology and VFX tools, chroma-keying has come a very long way since the days of Dick’s dancing paintings. Smartphones and even teleconferencing software can now replace your background, but getting a realistic result still comes from the skill of the operator, the quality of the camera and VFX tool, and the time taken to match the background and foreground environments.

This begs the question, with the advancement of chroma-key technology and visual effects, will real locations be used in film production in the future? I don’t know the answer to this, but I do know there is an art and skill to filming in both virtual and physical environments, and long may it continue.

If you are considering using chroma-keying in your video production, here are some points to ponder:

The magic of green-screen – understanding it, and when to use it2021-12-162022-02-15https://7streammedia.com/wp-content/uploads/2022/02/7sm-web-logo22col.png7 Stream Mediahttps://7streammedia.com/wp-content/uploads/2021/11/acer-scaled.jpg200px200px
Find Us
7 Stream Media
The Old Cartshed
Herriard Park
Basingstoke
Hants RG25 2PL
NAVIGATION
Home About Us Services Portfolio News & Insights Contact Us
Follow Us
Site by P&P
Contact Us 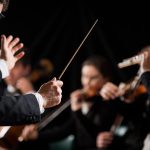 How to choose music for your videoAll, Commercial and Promotional Films, Remote Filming and Mobile Studio